History of the Award 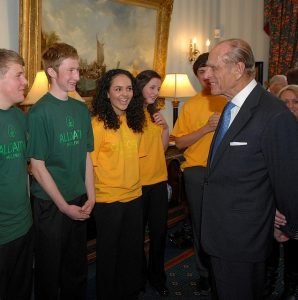 The Duke of Edinburgh’s International Award grew out of the efforts of three men: The Duke of Edinburgh; Kurt Hahn, a German educationalist and founder of Outward Bound, and Lord Hunt, leader of the first successful ascent of Mount Everest. The Award was first launched in The United Kingdom in 1956 for boys aged 15-18 to motivate them to become involved in a balanced program of voluntary self-development activities.

Based on the philosophy of Kurt Hahn, founder and headmaster of Gordonstoun School in Scotland (where HRH The Prince Philip attended), the Award was designed around four sections: Rescue and Public Service Training, the Expedition, Pursuits and Projects, and Fitness.

Although initially only available to boys aged between 14 and 18, there was great demand for a similar scheme for girls, and this was launched in September 1958. The Award continued to evolve over subsequent decades, until 1980 where the upper age limit was extended to 24, and the Award took on its current four section format of: Service, Adventurous Journey, Skills and Physical Recreation.

As soon it launched in the United Kingdom, The Award quickly spread and was soon running in many schools and youth groups outside of the British Commonwealth. The unique composition of the Award program is made it easy to be adapted and integrated into many different cultures and societies. To find out more the global reach of the Award visit The Duke of Edinburgh’s International Award Foundation.

The Award in Romania In Romania, the program was first introduced in 1991 by Sister Agnes in Roman-Catholic Parish of Motru, being carried on locally until 2011. Since 2011, the program has expanded nationwide, where it was successfully implemented in several cities of Romania.

In April 2013 the license for Award Romania was signed in the presence of Secretary General, John May, thus our country becoming an Award National Authority. This was possible thanks to the support of the Little People Association of Romania. Since June 2013 The Duke of Edinburgh’s International Award Romania is patronized by Her Royal Highness Crown Princess Margareta of Romania.

The first event as Patron was the Royal Gala for the official launch of The Duke of Edinburgh’s International Award Romania, a unique event which has brought together the Royal Families of Romania and Great Britain, the Ministry of Education and more than 150 representatives from the public and private, sponsors and partners.

Since then, the Award has seen a rapid expansion, with thousands of successful participants of the programme, empowered with not just the confidence but the desire to create meaningful change, finding their purpose, passion and place in the world.

For all young people everywhere

Global expansion over the last 60 years has enabled the Award to continue its growth and touch the lives of young people in more than 130 countries. The International Foundation continues to evaluate and modify the program to suit the changing demands of modern society and needs of young people.  The Award is now expanding in other ways, targeting those who have not previously had opportunities to develop themselves. Recent Award projects around the world have focused on involving young offenders, those with disabilities, street children and aboriginal communities. The impact of the Award on many of these young people is extraordinary: it transforms lives.

The spread of the Award across the globe is testament to its universal appeal and the vision of its founder.  His Royal Highness has remained committed to the Award since its inception over nearly 60 years ago. He continues to be involved, particularly in recognizing the achievements of Award participants and the adults who support them.

The 60th anniversary of the Award program

“There is more in you than you think”

To celebrate this exciting milestone we’ve joined up with members of our global Award family to tell the stories of the positive impact the Award has had on their lives. By producing a series of 60 second films (5 of them with Romanian Award participants, Leaders or Supervisors), we hope to inspire millions more people to get involved, either by doing the Award or becoming a volunteer.

After all, even 60 years down the line, to echo Kurt Hahn……there is still more in all of us than we think.